‘We Demand a God Who Is OK with Our Sin’

People want a god in their own image so they can sin freely:

Ever since our first parents sinned, turned their backs on God, and started making cheap excuses for their rebellion, the world has continued to do the same. We all reject God, we are all sinners, and we all want to refashion God into our own image and likeness. It’s the oldest game around.

We do NOT want a holy and just God who is implacably opposed to sin and who must punish it. And we do not want a God who cannot allow unholiness into his holy heaven. We want a God who is just like us: a God who winks at sin, tells us we are just spiffy the way we are, and makes absolutely no moral demands on us. 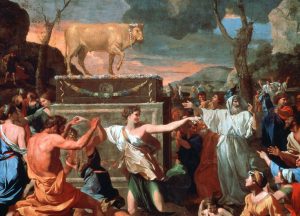 We really want Satan, in other words, to be our God. We want someone who will tell us comforting lies, who will go along with our sin, and who will make us feel good about ourselves as we spit in God’s face and tell him we know better than he does what is right and wrong, true and false.

I write all this because of what I just saw in an online newspaper. Because the article is behind a paywall – and I sure ain’t gonna pay for this pack of devilish lies – I can only give you the headline and the opening sentences. But what I could read was quite enough to know where this was heading. The Herald Sun piece from today said this:

When the Christian faith I believed in no longer had faith in me because I came out as gay, I felt unlovable. It was paganism that finally helped me to love myself, writes David Black.

With this was a pic of him and his male partner, presumably from their “wedding”. This spiel is as common as it gets – you hear it all the time. It is the same old sob story that sinners dish up: ‘God is far too unloving and unkind, and so are God’s people. They just won’t accept me as I am – a sinner who loves my sin and refuses to give it up.’

‘What I need is complete and total acceptance for who I am. I want a god who fully agrees with me and my sin, who has no problems with it, and in fact delights in it and promotes it. I want a god, well, just like me in other words. In fact, I want to be God. I want to call the shots.’

Ever since the Fall sinners have been dishing up this anti-God nonsense. We have been trying to remake God into our sordid image ever since Adam and Eve turned against God. There is nothing new under the sun: sinners are gonna sin; sinners love their sin; and sinners want a “god” who fully approves of their sin.

Yes I know exactly how all the trendy lefties – including trendy lefty Christians – will run with this story. They will actually side with the sinners here. They will agree with them, and say, ‘Yes you are right. Christians are so unloving. They should have accepted you just as you are. After all, God made you that way, so they should just accept you, love you, and welcome you with open arms into the church.’

To see how utterly unbiblical and diabolical this is, one can simply put any other sin in the place of homosexuality to see just how bad all this sounds:

-When the Christian faith I believed in no longer had faith in me because I came out as a bank robber, I felt unlovable. It was paganism that finally helped me to love myself.

-When the Christian faith I believed in no longer had faith in me because I came out as an adulterer, I felt unlovable. It was paganism that finally helped me to love myself.

-When the Christian faith I believed in no longer had faith in me because I came out as a fornicator, I felt unlovable. It was paganism that finally helped me to love myself.

Sorry bud, but we all have to ask: Did you ever have any genuine Christian faith to begin with? If you did, you would have believed in God and what he said about right and wrong, and not pretend you know better than he does. You would know that sin is never OK, and God never bends his rules to make sinners feel good about themselves.

And you are completely deceived to think you are loving yourself now that you have told God to get lost and embraced your paganism. This is actually the height of self-loathing, not self-love. God made us to walk in relationship with him. When we turn our backs on him, we reject the way we were made to be. We are loving ourselves straight to a lost eternity.

And David, God loves you far too much to allow you to keep wallowing in your sin. He cares about you too much to just sit back and allow you to keep sinning your way into hell. He has taken steps to set you free and find new life in Christ. Indeed, he gave his only Son to make this possible. Now that is real love – something the world, the devil, sin and self can never give.

Needless to say, I have no idea who this guy is, but we can and should pray for David. Like millions of other sinners, he has fully bought into the lies of the enemy and has allowed himself to be fully deceived. Preferring sin and self to the love and grace of God is a fool’s bargain. It will not turn out well.

But as I say, folks like this are a dime a dozen. Making excuses for sin has been going on ever since that dark day in the Garden. There is nothing new here. The only thing somewhat new is now having newspapers run with this deception, siding with the Devil and siding against God.

David – like every one of us – will have to give an account of his life one day when he stands before his creator and judge. So too will the editors of this newspaper. Keep praying.